skip to main | skip to sidebar

After seven months in Armenia, I decided to cut short my year to spend time in France. I am going to be living with a few families, working on their small farms and sharpening up my language skills.

Four days ago I took a 41 hour bus ride from Yerevan to Istanbul. On the bus with me was one French girl. The rest were Armenians mostly involved in the fabric and clothing business. They buy cheap clothes in Istanbul once a month making, in four days, an 82 hour round trip travel excursion. I can't quiet explain how surreal it is to enter Turkey (of course via Georgia due to the closed border) with a bus full of Armenians....and not diaspora Armenians like myself. Mostly tough looking women in their 50s from Yerevan. The road through Turkey was mostly along the Black Sea. We stopped nearly five times. Sitting drinking tea and coffee with these older women near lovely mosques along the water will be forever imprinted in my mind. In my limited Armenian we exchanged many conversations. Repeatedly it was said that no animosity existed towards the Turks. They viewed them as business partners. Most of their grandparents were Genocide survivors. Many of their families once lived in Eastern Turkey.

I feel like I am echoing the annoying, overly simplified, articles from the Economist or WSJ imploring that the borders be opened due to economic reasons, but I leave Armenia feeling just this.

I stayed in Istanbul for two nights. Here is one of the Armenian churches not too far from Galata Tower. 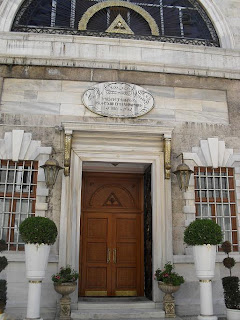 I am now in Athens before heading to France. Wandering the streets today I ran smack into an Armenian church. 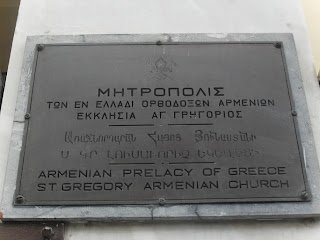 I haven't been away long enough to reflect on my experiences in Armenia and this ramble that I am doing right now isn't exactly capturing my feelings. But overall, I am left with a profound sense of having lived amongst a proud people with deep roots. The Armenians, with their sad eyes and expressive eyebrows, are survivors.

For those of you that read my blog bless your souls for dealing with my stream of consciousness.
Posted by Ms. Schumacher at 6:50 AM 2 comments:

Sometimes I feel like I am cheating on my coffee mug with tea. 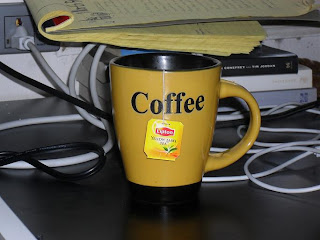 Last Thursday, Armenian President Serge Sargsyan payed a visit to the United Kingdom. Despite working in politics in my past, I do not work in politics in Armenia. My office rarely discusses Armenian politics. But when we sat down for lunch last Friday I was surprised by the conversation. Everyone was speaking rather proudly of Sargsyan's trip to London, specifically about a speech he made at the Chatham House.

Below is the substance of the speech related to Karabakh that my office and, it seems, the country felt proud of...

"The problem can only be resolved in the context of the international law principles of the self-determination of nations, territorial integrity, and the nonuse of force. All the stakeholders now realize this truth. Whenever one refers to the Mountainous Karabakh conflict, the notion of territorial integrity should not be emphatically underlined, especially that even if that notion is perceived to be the only one applying in the case of the Mountainous Karabakh conflict, it would not lead to its application in the form envisioned by Azerbaijan.

I would pose a rhetoric question to all who consider themselves advocates of territorial integrity. Where were they when the Soviet Union collapsed and the borders changed? Where were they when Yugoslavia was falling apart? Why do you think that Azerbaijan could secede from the USSR, but Mountainous Karabakh could not? Why do you think that large empires should disintegrate, but small ones should persevere? What is the basis? Instability? I cannot perceive it. I do not accept it. Because unfair decisions are the very cause of instability.

Azerbaijan has exhausted the resources of trust in terms of autonomous status for minorities within its boundaries. It was not and is not capable of providing guarantees of even internal security to such autonomies. There was once another Armenian autonomy in Azerbaijan: Nakhijevan. What happened to it? Not a single Armenian is left in Nakhijevan. Can such guarantees be taken for granted? You might say Azerbaijan was different then, and is different now. During the last 18 years of that ‘difference’ more Armenian and Christian monuments were destroyed than in the preceding 70 years. The international organizations tasked with protection of the cultural heritage were unable to do anything: Azerbaijan did not even permit them to visit and see the obliterated Armenian monuments.

In the meantime, a full-blown race of arms continues in the South Caucasus. It is extremely dangerous. It is dangerous not only for the South Caucasus peoples, but also for Europe and the powers that have a stake in the region, the corporations that have invested in the Caucasus, and everyone else. Azerbaijan has not faced any substantial confrontation for having exceeded all the possible caps on conventional arms. Even if not used in a war against Karabakh, the weapons Azerbaijan is stockpiling today will shoot somewhere. The only question is where and when. While spending large sums on purchases of oil, the advanced states, in my opinion, cannot remain indifferent to how their moneys are being spent. The fact is that these very proceeds can become a source of threats, something that has happened elsewhere in the past."
Posted by Ms. Schumacher at 1:10 AM No comments:

Near Yerevan's Cascade stands the tall and lean statue of William Saroyan, an Armenian-American writer. 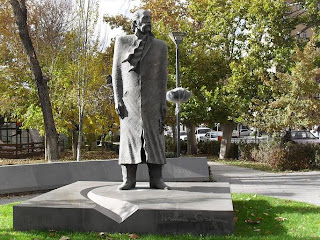 I knew little of Saroyan before coming to Armenia, but his name kept drawing my attention in the city's book markets. Saroyan grew up in Fresno, California and tasted fame with his set of 1934 short stories, "The Daring Young Man on the Flying Trapeze".

Saroyan also penned the 1939 play, "The Time of Your Life" and won a Pulitzer for it, but refused the award. Some not so pleasing details of his personality. He appears to have been a total egoist. He is on record dubbing himself a literary superior of Hemingway and said of one of his short story collections...''damned near the 'Ulysses' of the American short story''.

Despite these unsavory aspects of his boasting character, he does seem to have left his mark on the literary world. A quick NY Times search on his name yields over 2200 references to him and a similar exercise with the New Yorker bring 28 results. Saroyan wrote short stories for the later in the 1970s towards the end of his life.

You can read more about Saroyan through the joy (and some times detriment) of Google Books:

The story "Seventy Thousand Assyrians" is quiet good and reveals a bit about Saroyan's obsession with Hemingway and ethnicity.
Posted by Ms. Schumacher at 9:10 AM No comments:

One of the documentaries my office has been working on is about the culture of Lamu island that sits just east of Kenya. The island has thousands of donkeys and only a handful of cars. 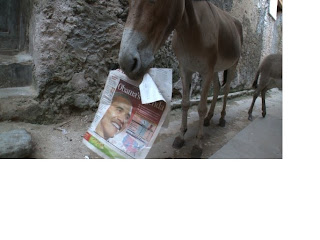 Though the company spends lots of time on regional issues, they have started branching out to other areas of the world. As I watch what going on politically back in the States I can't help but want to scream, so I sometimes turn to this picture to see the humor in donkeys.

The photo was taken by our staff. You can learn more about Lamu and its donkeys by becoming a fan of our donkey page on Facebook:

Donkeymentary: Life Through the Eyes of a Donkey
Posted by Ms. Schumacher at 1:28 AM 1 comment:

Yesterday: ducks dancing around the pond felt like a warm, rainy spring day... 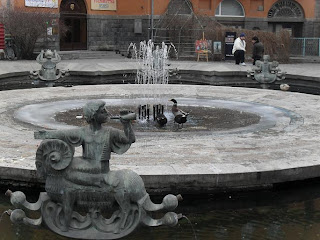 Today: winter snow hugging the last grapes that have refused to drop... 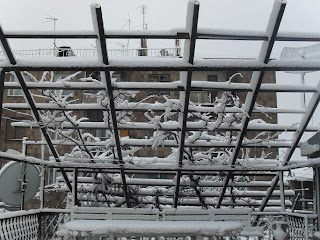 It's the second snow here. Everyone is thrilled despite being mildly worried that winter came two months late. Even in little old Armenia, global warming is suspect number one amongst the locals.
Posted by Ms. Schumacher at 5:48 AM 1 comment:

Carlos Ruiz Zafón's "A Shadow of the Wind" starts off with an enchanting description of a "cemetery of lost books" under a bustling Barcelona. Yerevan's streets don't exactly offer magical libraries, but they do have many small businesses in underground thoroughfares. One of these underground passageways is home to thousands of books in Armenian, Russian, English, French, Italian, and German. 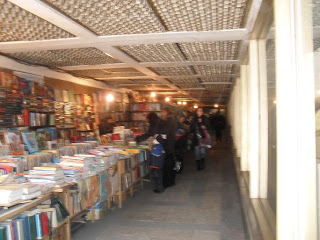 During the day the crowded book market echoes with sellers trying to lure you to their side of isle. With me, they mostly hold up English books. Interestingly, at night, the book sellers cover their dictionaries and novels with blue tarp and go home. 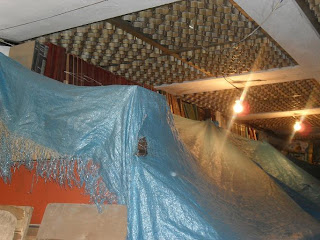 It's a bit disconcerting to see the books out in the open ready to be picked up by the rare book robber, but it's also tremendously refreshing to be exposed to a society that trusts in his fellow man (at least his fellow Armenian man).
Posted by Ms. Schumacher at 10:16 PM No comments: